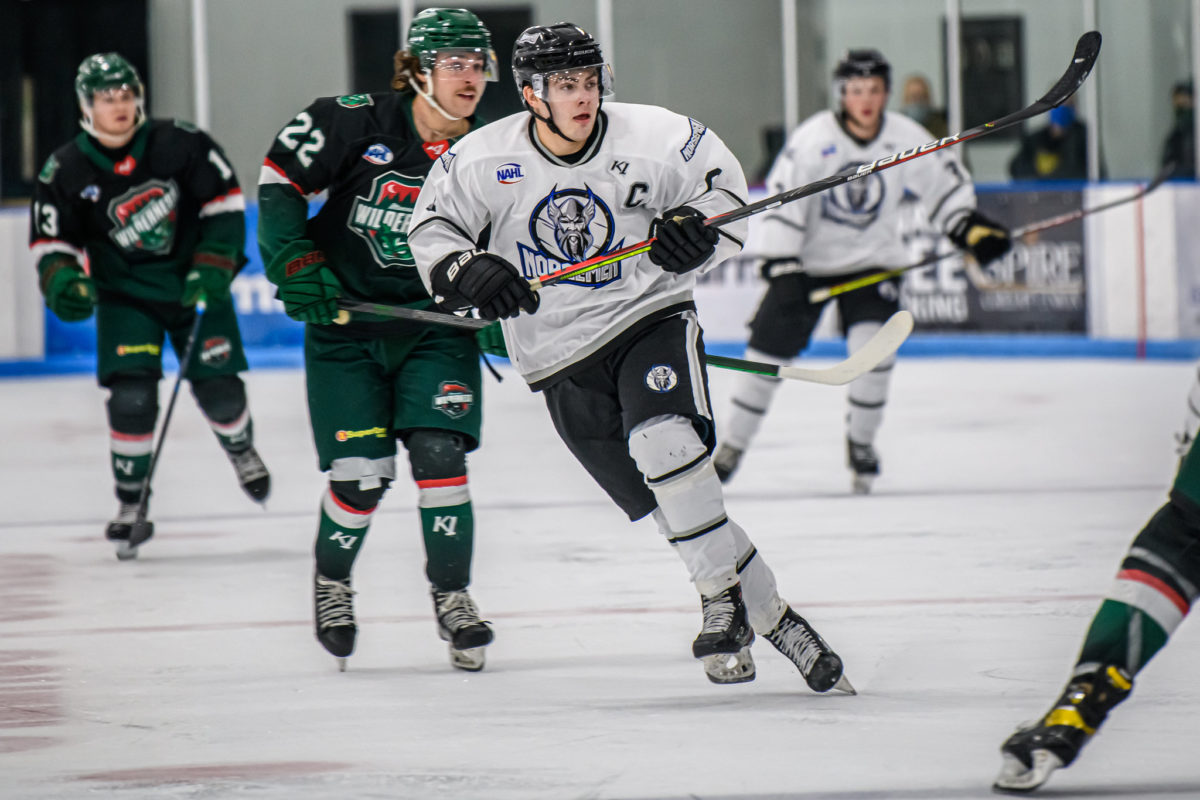 It’s a safe bet that if you were to drop in on any NCAA men’s college hockey team this week you would notice that something is different.

For the Division I men’s programs, which already have started preseason training, if you attended a practice you might observe that they are short at least one coach on the ice. And if you popped into the hockey office at one of the Division III hockey schools, which begin practicing in a few weeks, you likely would find what amounts to a ghost town.

What’s going on? Are these guys slacking? Is there some sort of coaching convention or a conference going on somewhere?

Nope. It’s no big deal at all, just the Greatest Show on Ice.

What do you mean? Did the circus come to town? Do they even still allow circuses? Is Disney on Ice at the local arena? Help me out here.

None of the above.

So, what’s the big deal? Isn’t it just another hockey tournament? Aren’t there 1,000 showcases in September, October and November?

No, it’s not just another tournament. Yes, there are a ton of showcases. It’s just that this one is different.

“The NAHL Showcase is truly the Greatest Show on Ice,” NAHL Commissioner and President Mark Frankenfeld said in a news release. “No other event in the hockey world brings people together like the showcase. The opportunity it represents for our teams and players is one that is unique to the NAHL, and we always look forward to seeing a new crop of players and talent showcase their skills.”

The North American Hockey League is a Tier 2 junior hockey league for players 20 and under that extends into 17 states from Maine in the Northeast United States, south through Maryland into Louisiana, west into Texas and back north up through the Midwest into Oklahoma, Minnesota, the Dakotas and Wisconsin. There even are three teams in Alaska. The league features 29 teams spread out among four divisions.

And it has become the top junior league in North America as far as producing NCAA college hockey players.

For the 2021-22 season the NAHL accounted for more than 300 college commitments for the sixth consecutive year, with more than 75 percent of those players committing to Division I programs. According to the league’s website, 32 percent of that year’s incoming D1 freshman class was comprised of players who had competed in the NAHL. In that six-year span that has featured better than 300 NAHL commitments per year, more than 1,500 NAHL players made NCAA commitments and 32 were drafted by National Hockey League teams.

The league is part of USA Hockey’s National Junior Development Model, which includes the Tier 1 United States Hockey League (USHL) and the Tier 3 North American Tier 3 Hockey League (NA3HL). There is no tuition for players to play at the Tier 1 or Tier 2 levels of junior hockey, which means that the USHL and NAHL are the only USA Hockey-sanctioned tuition-free junior leagues in the United States. Tier 3 junior hockey is pay to play.

The USHL offers the highest level of play among U.S. junior leagues and is comparable to the Canadian Hockey League major-junior circuits in Canada. USHL rosters tend to feature younger players who eventually will play for top NCAA Division I teams and may be NHL draft prospects. There is a limit to the number of age-out (20-year-old) players each team can roster.

That is not the case in the NAHL, which is home to older players who may have to wait longer to receive Division I offers and make their commitments. The general assumption is that players who are in the USHL will play at the D1 level if that’s what they choose to do. Players in the NAHL will play NCAA hockey, with the majority advancing to the Division I level, and the rest playing for top Division III teams.

The NAHL doesn’t only feature late bloomers, however, as the league also is a starting point for some younger D1 commits who need more time to develop and ultimately get moved on to the USHL. At the end of the day, more than 85 percent of all NCAA hockey players spend time playing junior hockey at some level. The top Tier 3 pay-to-play junior leagues also send hundreds of players on to play at the D3 level on an annual basis.

There also are 29 teams with college-capable players in the NAHL, compared to 16 in the USHL, and many colleges have no chance of committing Tier 1 junior players. That’s why college coaches from all levels flock to Blaine for this week’s showcase. It’s one-stop-shopping for them, which is especially important to the Division I and III programs with smaller recruiting budgets. Where else can you go to watch 14 games per day in one location and be confident that every single player on the ice will be capable of playing NCAA hockey?

The event is especially important for D3 coaches who scramble every year to grab the 25 or so percent of the players in the league who either choose not to play Division I or narrowly miss out on getting D1 offers. In addition, NAHL teams have yet to make their final cuts, so there are an additional 60-plus skaters participating who may not quite make it to the NAHL but will one day be very good college hockey players.

That also makes the showcase incredibly important for players who may be playing in the league for the first time or fighting for final roster spots. It’s an opportunity to make a great first impression on college coaches who previously may not have seen them and to get on their radar to be scouted and tracked in the future. The coaches will get contact information for the players they like and follow their junior careers wherever they end up playing.

The reality of the situation, once the players fully grasp it, creates a buzz surrounding the event and a level of intensity and competition that carries over into and throughout the regular season and Robertson Cup Playoffs. Players are fighting for jobs and pursuing their dreams, which continues throughout the year and produces an extremely high level of competition as they compete daily to get in the lineup, stay in the lineup and advance to the highest level of hockey they can achieve.

The bad news is that some of the players in Blaine won’t make the cut and will be let go later this month. The good news is that coaches or scouts from every team in the NAHL and other strong North American junior leagues, as well as more than 100 college coaches, will get to see those players compete in person this week.

Making it that far and surviving to play even a few games in the NAHL speaks volumes about a player’s ability and future potential in junior and college hockey. The league is so respected that there are Division III college programs that will commit to players with NAHL experience without ever seeing them play in person. There also are strong junior programs that will take one of the players who doesn’t make it without seeing them play at all.

All it takes is a phone call from a NAHL coach or general manager, and the deal is done. Fortunately for those who don’t make it, the league does a great job looking out for its players and helping them find good homes if it doesn’t work out in the NAHL.

Still, going through the process of working hard to get drafted or tendered by a team, attending predraft and main camps, getting selected as one of the final 35 players to attend training camp, making the 25-man preseason roster and then ultimately being released after most teams have started their seasons is physically, mentally and emotionally draining. Junior hockey is a tough business and is not for the faint of heart, as we have written here before. But for most players who want to play at the NCAA level it is a necessary evil.

The NAHL also has a strong developmental program that includes the Tier 3 NA3HL and the North American Prospects Hockey League (NAPHL), which offers showcase opportunities throughout the year for AA and AAA players between ages of 15 and 18. NAHL teams are required to scout events featuring NAPHL and NA3HL teams and to provide opportunities to the best players in those leagues by extending tender offers or drafting them.

This week’s NAHL Showcase will be accompanied by a similar event featuring 16U and 18U teams from the NAPHL, allowing some younger players to get in front of NAHL and college coaches and scouts for the first time. Running concurrent events at the same venue makes it easy for the NAHL and college coaches to pop in and watch these players without further taxing their travel and recruiting budgets.

It's truly a win-win situation for everyone involved.

A Division I coach might find a younger, under-the-radar player worthy of bringing to campus for a visit and considering for a possible future commitment. Division III coaches, who generally only scout older players who are closer to aging out, can get a head-start on future recruiting classes and add players to their databases for tracking purposes when under normal circumstances the cost to travel and see teams in those age groups might be prohibitive.

“Because our 2025 recruiting class will be huge, we also will attend the 18U NAPHL event this week,” Matarazzo said. “We will start the relationships early and follow the players throughout their careers.”

While this week’s NAHL Showcase is a prime example of why the league has zoomed to the top of the heap in terms of overall NCAA hockey commitments, it’s just the tip of the iceberg. The league has made a concerted effort to develop an infrastructure that allows prospects to get exposure at young ages and be tracked easily by NAHL teams as well as by college coaches throughout the duration of the recruiting process.

This creates loyalty among affiliated players and organizations and opportunities for players to be seen multiple times by coaches and scouts at different levels. The more that players are seen, the better their chances become of continuing to advance along the developmental ladder.

For the NAHL, the results speak for themselves.

Week 2 MHR Games of the Week

Calling All Goalies: It's That Time Once Again!

An Updated Outline of Junior Hockey in the United States