Since the 2012-13 season, MHR has posted site and game rules on our Rules and FAQ pages. The intended meaning of the rules and how they are applied have not changed, but the ever-transformative landscape of youth hockey has forced us to add clarifiers over the years.

Truth of the matter is this is not an exact science. While most situations are cut and dry, there are some unique situations virtually every season. The MYHockey team does our best to apply our rules and requirements consistently across the board in order to maintain the integrity of the rankings.

What teams qualify for the USA minor birth year rankings?

Any team can qualify and be placed in the minor birth year rankings one of two ways:

There are three major points of clarification here:

What USA teams qualify for the Tier 1 rankings?

Starting with the 2012-13 season, MYHockey switched its rankings in the USA from "AAA" and "AA" to "Tier 1" and "Tier 2". MYHockey uses the common sense definition of Tier 1 hockey.

MHR defines Tier 1 hockey as teams/leagues playing at the highest level of hockey in a geographic area. Teams and clubs playing in a Tier 1 league will be identified as Tier 1 in the rankings.

Second picked teams from an association and teams playing in the second or third division of a league (where divisions are based upon skill level) are not Tier 1 by its very definition.

The primary region of the country where this is an issue is New England where peewee and bantam teams playing in the Elite 9 Hockey League (E9HL) and the Elite and South divisions of the Eastern Hockey Federation (EHF) qualify for the Tier 1 rankings. All other teams will be classified as Tier 2. As a result of these rules, you will see teams labeled as "AAA" in the USA Tier 2 rankings.

Tier 1 teams who did not play more than 2/3rds of their games against Tier 1 competition the previous season and who don't play in a recognized Tier 1 league, will be reclassified as Tier 2. Teams may request reclassification to Tier 1 starting with the first ranking in November if they meet the 2/3rd game requirement.

Newly formed teams/clubs that do not play in a recognized Tier 1 league and are not a direct extension of a Tier 1 team from the previous season, will be able to request reclassification with the first ranking in November as well. This also applies to squirt major teams transitioning to Tier 1 at the peewee minor age level.

Prior to November, MYHockey will only consider reclassifying teams as Tier 1 if they play more than 2/3rds of their games against Tier 1 competition and are ranked in the top 5 of the Tier 2 rankings.

Midget teams are identified as Tier 1 or Tier 2 based upon the division of the league they play in. Independent teams can largely self-identify unless they are predominantly playing opponents at a different level than they are identified. Teams playing in AAA leagues (outside of New England) will be placed in the Tier 1 rankings.

Simplified to the core, there is one basic principle here that can be stated in a couple ways. First, only if you play at the highest level in your geographic region will you be labeled Tier 1. Second, if a club is not a Tier 1 club and/or its teams are not in a Tier 1 league, then they are not going to be recognized by MYHockey as Tier 1 unless the team meets our 2/3rd game requirement.

There are a few teams/clubs out there that legitimately fall into a “gray area”. In these cases, please reach out to MYHockey using the Contact Us page. We will attempt to apply our rules as consistently as possible to determine the proper placement of “gray area” teams. In black and white situations, requests to reclassify will not be entertained. 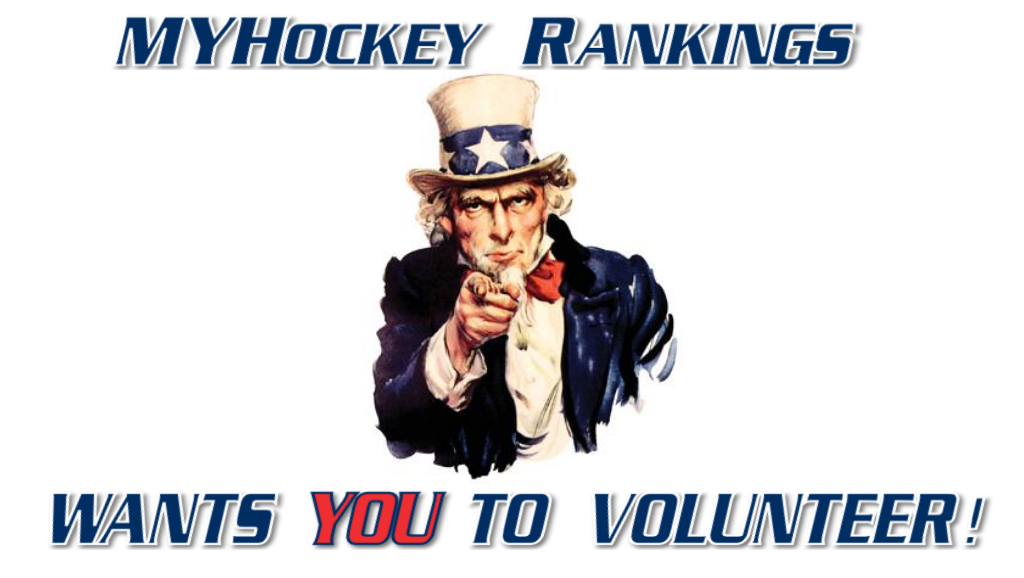 MYHockey is Seeking Volunteers for 2018-19 Season

Thank You for Another Great Season